“Smart, to the point and full of important info.  It will be helpful for all kinds of filmmakers – those starting out or those wanting to change their practice. A great book.”

“A powerful and in-depth exploration of intimate, minimal crew documentary filmmaking. Smartly written, incorporating excellent illustrations of the best practices, Get Close drills into the art and aesthetics of non-fiction storytelling and is a must for teaching this curriculum. I look forward to using it.”

Please consider buying the book from your local independent bookstore. Also available at OUP and Amazon.

I believe that learning all the skills of documentary filmmaking–and practicing them–is essential to artistic freedom. In my book, Get Close: Lean Team Documentary Filmmaking (now available from Oxford University Press), I explain and advocate for a way of working that emphasizes becoming the author of your own film from start to finish. I want to help emerging and even veteran filmmakers spend more time making films and less time struggling to make films.

I would have loved to be the next Scorsese or Altman, but my university had a lousy film program, so I studied Broadcast Journalism instead, where I was introduced to the basic skills in shooting, editing, and writing. I’ve spent the last 20 years as an independent filmmaker, working as a lean team of only one or two people.

My own docs have played in festivals and are distributed by major educational and online streaming outfits. Are they well-known? Not really. Am I famous? Who cares. Do I make a lot of money? Laughter ensues. But I get to be something I always wanted to be: a constant filmmaker.

In Get Close: Lean Team Documentary Filmmaking, I encourage you to make artistically rewarding documentaries at a fraction of the usual runaway costs of making films today. This is accomplished by keeping your documentary team lean and eliminating the costly barriers between you and your story. Remove the need for bloated crews, flocks of assistants, and executive overseers and get close to your characters and subject matter.

This book demystifies and de-clutters the way docs are produced. I show you how to use a few simple, accessible tools and techniques to engage with the aesthetic possibilities of the medium, its creative opportunities and its satisfying rewards of giving back to the world. This book details clear, concise steps for eventually mastering the skills involved in every step of the filmmaking process: the conception, planning, producing, storytelling, funding, filming, writing, editing, and distributing of a feature-length documentary, all accomplished with a lean team of only one or two people.

Get Close: Lean Team Documentary Filmmaking helps find your authorial voice. This book emboldens you to pursue documentary filmmaking for the joy of it. 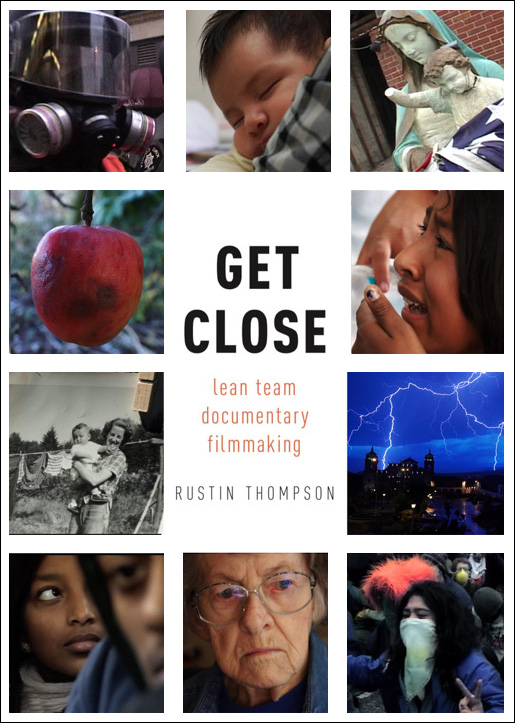